This is my notes for the second chapter of the book “Topology without Tears” by Sidney Morris. We’re going to discuss the Euclidean topology. During the writing of this note, I also had the first sense of the close relationship between geometry and topology. This is one of the rare notes that have GeoGebra visualizations, so keep reading! You will find one in a proof somewhere in this post!

The Euclidean Topology on

Definition. A subset S in is said to be open in the Euclidean topology on if for each , there exist such that

It is common that if we say the topology on without defining the topology, we mean the Euclidean topology.

If F is a non-empty countable subset of , then F is not open, but it can be closed or not closed, depends on the choice of F. ▶ Proof

Suppose F is open, then for each , there exist such that . However, F is countable and (a,b) is uncountable, contradicts . Hence F is not open.

F can be closed or not, dependently on F itself. For example, if F is the set of all primes, is the infinite union of open sets, hence an open set.

On the other hand, suppose the set of all rationals. F is still countable because it is isomorphic to , which is the Cartesian product of two countable sets. However, we cannot use the same argument as presented when F is the set of all primes, because we basically cannot “sort” F (between any two rational numbers there are infinitely many other rational numbers). We shall check if is open using the definition and proof by contradiction. Suppose it is open, then for every we can find an interval containing and is a subset of . However, such an interval will never exist because in the interval there are rational numbers, so it can’t be a subset of . Hence is not open and is not closed.

Definition. In a topology space , a subset S is said to be an -set if it is the union of countable number of closed sets.

Corollary. In the Euclidean topology on , all intervals (a,b) and [a,b] are -sets.

Definition. In a topology space , a subset S is said to be an -set if it is the intersection of countable number of open sets.

Corollary. In the Euclidean topology on , all intervals (a,b) and [a,b] are -sets.

is the union of open intervals, hence open. is closed.

This is not an open set because by definition, when we cannot find any open interval containing 0 and is a subset of . Hence is not closed. (This is another example of a countable set not being a closed set.)

Basis of a Topology

Theorem. A subset S in is open iff it is a union of open intervals.

Just like a vector space, in a topological space, the notion “basis” also appears and is defined below:

Definition. Let be a topo space. A collection is said to be a basis for the topology if every open set of can be represented as the union of members of .

By definition, there can be many bases for the same topo. It can easily be seen that if is a basis, then any that is also a basis. However, one cannot arbitrarily choose a set and generate and call a topology. There are certains conditions so that is a basis.

Theorem. Let X be a non-empty set and let be a collection of subsets of X. The collection of all unions of members of is a topology iff: 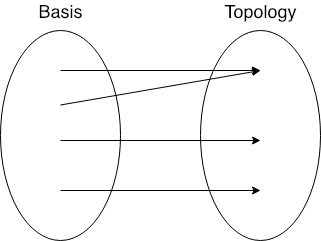 If a collection satisfies these conditions, there is a unique topology for which is the basis. This topology consists of all unions of members of . Otherwise, is not a basis for any topology. ▶ Why unique?

Sum up: One topology can have many bases, but a topology is unique to its basis. It is a well-defined surjective mapping from the class of basis to the class of topology.

We define an open rectangle (whose sides parallel to the axes) on the plane to be:

The collection of all open rectangles is the basis for the Euclidean topology on .

In general, let’s define an n-orthotope (whose sides parallel to the axes) in an space to be:

The collection of all n-orthotopes is the basis for the Euclidean topology on .

Theorem. Every disc is an open subset of . ▶ Proof

Consider a disc . Choose an arbitrary point within this disc. Let . Construct an open rectangle with be the vertices. We need to prove this rectangle lies completely within the disc, i.e. its four vertices lie in the disc.

On the other hand, since , we have

In the visualization below, you can drag the point C around. As long as C lies in the disc, you can see that the rectangle (or more precisely, the square) always lie in the disc.

That means we can say that this disc is composed of the infinite uncountable union of open rectangles, hence it is an open set. In a general case, we can also prove any disc is open by applying similar arguments as above.

Theorem. The collection of all open discs is a basis for a topology on . ▶ Proof idea

It’s easy to see that the union of all open discs form . We need to prove that the intersection of any two discs can be decomposed into a (uncountable and infinite) union of open discs. We use a similar technique as the proof for the previous theorem. Consider a point . Find a way to draw a disc that takes this point as its center, such that the disc completely lies within . Then we conclude the intersection is composed of an infinite uncountable union of open discs. Hence the set of all open discs is a basis.

If one basis of a topology is countable, we say that the topology is second countable and satisfies the second axiom of countability.

Basis for a given topology

Theorem. Let be a topological space. A set is a basis of iff , there exist such that . ▶ Proof

Since U is an open set, it is the union of , where and is some index set. But implies that there exists some such that , and obviously .

2. Prove that is a basis of if there exist such that .

This case is pretty obvious, any open set can be written:

where is the member of that contains the point x.

Theorem. Let be a basis of the topo space . A subset U of X is an open set iff , there exists such that . ▶ Proof

1. Prove that if is open then , there exists such that .

This is basically the same as the first part of the previous theorem’s proof.

2. Prove that is open if , there exists such that .

Again, very similar to the previous proof, we can show that is the union of members of , and therefore open.

To sum up: Given a topo space

When do two bases generate the same topology?

Theorem. Let be the bases for topologies , respectively, on a non-empty set X. Then iff:

Definition. Let be a topo space. A non-empty collection of subsets of X is called a subbasis if the collection of all finite intersections of memebers of forms a basis of .