In this post, we will discuss the concepts surrounding the topic “Regular Languages” like DFA, NFA, regular expressions, and two important theorems, the pumping lemma and Myhill-Nerode theorem.

A good representation for what is so called finite automaton is a directed graph with a finite number of vertices. Each vertex is called a state. Each edge is assigned with a value called a symbol. The set of all possible symbols is called an alphabet. There is also one node marked as the start state, and some nodes are marked as the accept states. We give this automaton a string s, the following will happen:

You may wonder, what if there are multiple e such that e == ch? Well, this is the formal definition of finite automaton:

Based on the definition of \(\delta\), you will always find at most one outgoing edge whose symbol concides with the character in the string. Such behavior is called “deterministic”, but we will discuss later.

If after browsing through all the characters in s, you end up with a current_state that can be found in \(F\), we say the automaton accepts s.

Notice that I mark some lines as A, B, C, … They will be the states of our automaton, the states that we care. Before the for-loop, I don’t mark any state because it is unnecessary. Now we should find the transition function, i.e. when to change from this state to another state. 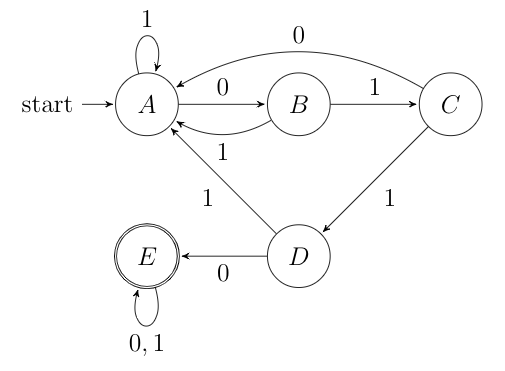 When two or more outgoing edges of a node have the same label, we call the automaton nondeterministic. Formally,

Note: A DFA is automatically an NFA.

Hence when process a string, the following will happen:

Theorem. Every NFA can be transformed into a DFA.

Regular expression is a way to generalize a language by exploiting its pattern. We use regular operators as operators, and symbols in the alphabet as operands, parentheses are allowed. For example, consider the language over \(\Sigma=\{0,1\}\) that contains all the strings that have 0110 as a substring, the expression can be written as:

The concatenation operator is sometimes omitted just as the multiplication operator in arithmetic. \(\Sigma\) is just another way of writing \((0\cup 1)\) which is the short-hand writing of \((\{0\}\cup\{1\})\).

Theorem. Any finite automaton can be transformed into a regular expression and vice versa.

In the graph representation of a GNFA, on each edge, instead of a symbol, there is a regular expression. You move from state to state over an edge if the next few letters in the input string fit the regular expression on that edge.

However, it can be shown that any GNFA that has more than 2 states can be transformed into a GNFA with exactly 2 states. We just need to remove the states sequentially, each time we remove a state, we need to redraw our edges. Suppose that we are removing \(q_r\), we need to bridge all pair of \(q_i\) and \(q_j\), where \(q_i\) denotes the state that goes into \(q_r\) via an edge and \(q_j\) denotes the state into which \(q_r\) goes via an edge. What regular expression could we assign for our edge \((q_i, q_j)\)? We need to think: how many ways can we go from \(q_i\) to \(q_j\)?

Note: I used := for simple writing, that means we redefine the mapping between \(q_i\) and \(q_j\). You can always define a completely new GNFA so that it will look more formal, more mathematical, and less programming.

Eventually you will end up with a GNFA that contains only \(q_{start}\) and \(q_{accept}\). Based on the source set of \(\delta\), there should be no self loop at any of these two states, i.e. there is only one edge on this graph. The expression on this graph is the regular expression representation of the original GNFA.

Note that a DFA or an NFA is automatically an GNFA, so the algorithm above can also give us the regular expression of the automaton.

Theorem: Pumping lemma. Let A be a regular language. There exists a number \(p\) such that any string \(s\in A\) whose length \(\geq p\) can be divided into three parts \(s = xyz\) satisfying the following conditions:

If A is a finite language, it vacuously satisfies the pumping lemma by choosing \(p\) larger than the size of the longest string in A.

Since \(A\) is regular, there’s a DFA that recognizes it. Let \(p\) be the number of states in the automaton.

For a string of length at least \(p\), it must go through \(p+1\) states as the string is emitted. By the pigeonhole principle, it must have reached some state at least twice. The substring that corresponds to the journey from the first appearance to the second appearance of the repeated state is \(y\) in the lemma. Hence, we can travel in this loop for an arbitrary number of times, or none at all, and can still reach one of the accept state.

(Please write that quote on my tomb when I die) 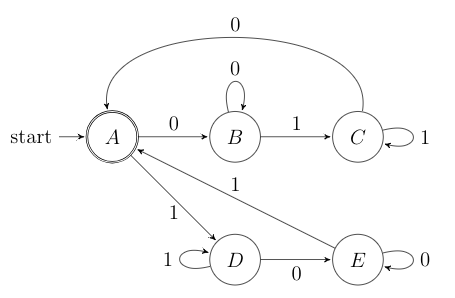 The DFA that recognizes the language of all strings containing equal occurences of 01 and 10 as substrings.

Finite automata have limited memory, i.e. finite amount of states, and they cannot recognize language that require infinite states. A famous example is the language \(\{0^n1^n \vert\ n\geq 0\}\). This language is nonregular because it has to remember how many 0’s it has read before reading the 1’s. There is no upper limit to \(n\), hence it requires infinitely many states.

On the other hand, the language of all strings that have an equal number of occurences of 01 and 10 seems like a nonregular because it may have to count the occurences, which can tend to infinity. However it is not necessary to count. Whenever you approach a substring 01 (state C), just wait until you get a 0, then the amounts are balanced. Vice versa, if you approach a substring 10 (state E), just wait until you get a 1. This language is regular.

We usually use the pumping lemma to prove a language to be nonregular by contradiction.

The class of regular languages

A finite-state transducer (FST) is an extension of DFA that not only returns “accept” or “reject”, but also outputs a string as the input string is processed. Each transition is labelled with two symbols, one specifying the input symbol and the other specifying the output symbol.

This means that, it follows the exact process as if it is the DFA, but at each transition it gives us an output symbol. The output symbol does NOT affect the traversal. Think of it as a debugger and you are writing to the screen the value of some variable.

Theorem. \(\equiv_L\) is an equivalence relation.

Theorem: Myhill-Nerode Theorem. \(L\) is regular iff it has finite index, and its index is the number of states in the DFA recognizing it.

1. Prove that if L is recognized by some DFA with n states, then its index is at most n.

We partition \(\Sigma^*\) into n sets, set \(S_i\) contains all the strings that when given to A will cause A to stop at state i. It can be seen that, if x and y are in the same set \(S_i\), for any string z, xz and yz will cause A to stop at the same state, and therefore both of them are either rejected or accepted, i.e. \(x\equiv_L y\) (though, it is possible for some strings x and y of different sets to be equivalent by L). In conclusion, \(S_i\) is a subset of an equivalence class.

2. Prove that if the index of \(L\) is a finite number n, it is recognized by a DFA with n states.

We have \(\Sigma^*\) divided into n equivalence classes. It is possible to construct a DFA such that if string x is from the class i, the automaton shall stop at state i, in that case we say the string x corresponds (just a made-up word) to state i. The construction of transitions can be shown recursively:

We can continue by proving this DFA recognizes L, but I would just stop here.

Combining the two results above gives us the Myhill-Nerode theorem.